Champions is a Children's Miracle Network Hospitals program that brings attention to the important work being done at its 170 children’s hospitals. It does this by honoring 51 remarkable kids who have faced severe medical challenges, and helping them tell their stories.

The Champions program designates a child in every state who has bravely battled a serious injury or illness. The Champions represent the nearly 17 million children treated at Children’s Miracle Network Hospitals every year. The 2011 Champions have dealt with a wide variety of injuries and illnesses including genetic diseases, organ transplants and traumas, as well as various types of cancer.

The Champions travel for a week in October, first to Washington, D.C., where they traditionally meet with their state senators on Capitol Hill, and the President of the United States during a visit to the White House. They then take a private chartered flight, provided by Delta Air Lines, to Orlando, Fla. There, champions meet Children’s Miracle Network Hospitals sponsors, hospital representatives and media partners who all convene to celebrate a year of medical miracles during the Children’s Miracle Network Hospitals Celebration event at Walt Disney World Resort.
Posted by Children's Miracle Network at 2:26 PM No comments:

Just days after her birth, Jayla developed a rash all over her body and began having seizures. She was initially thought to have a calcium imbalance, but Jayla was ultimately diagnosed with Complete DiGeorge Syndrome, an extremely rare disease that affects fewer than 10 babies born in the United States each year.

Born without a thymus gland, which is responsible for the “education” of T-cells that build our immune system, Jayla could have died from exposure to the smallest germ. Her family was referred to Duke Children’s Hospital, and doctors set out to save Jayla’s life.

Months after receiving treatment, a biopsy revealed a “super positive,” the first sign that the transplanted thymus Jayla received was working.

After living in total isolation for the first years of her life, today Jayla lives worry free. She beat initial life-expectancy odds of just one year, and is now attending preschool. She loves giving hugs, listening to stories and being around her sisters and classmates.
Posted by Children's Miracle Network at 9:43 AM No comments: 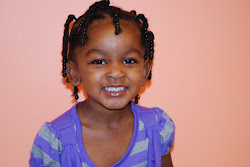